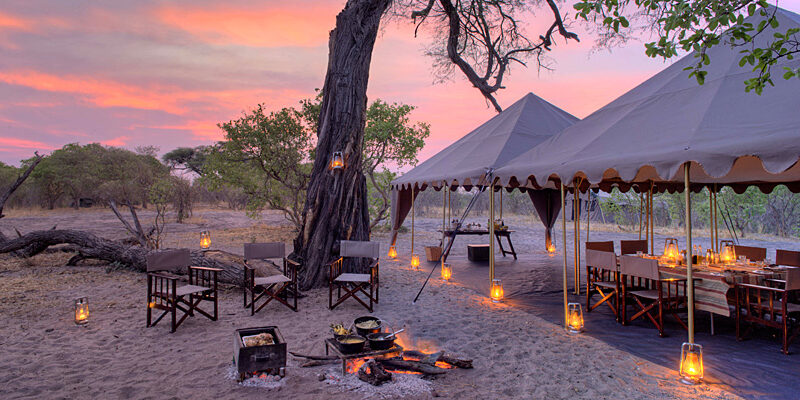 You are met at Livingston e OR Victoria Falls Airports and transferred by road to Chobe Under Canvas on the Chobe National Park in Botswana. 2 nights at Chobe Under Canvas including all meals, local brand beverages, safari activities & laundry 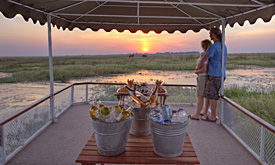 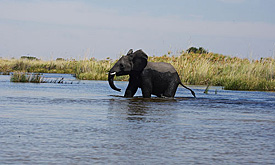 Featuring just six superlative ensuite safari tents, carefully positioned in exclusive semi-permanent camps (on or near the Chobe River), is the elegant Chobe Under Canvas, situated in the Northern part of the Chobe National Park.

Chobe National Park encompasses 11 700 km2 of wilderness, bordered in the north by the beautiful Chobe River, and buffered on all sides by wildlife management areas and forest reserves allowing for the free movement of game. A wildlife enthusiast’s dream, Chobe National Park is one of the top wilderness reserves in the world and is home to the largest single concentration of elephant. Throughout the year, herds of buffalo and elephant can be seen drinking at the river’s edge with their numbers swelling into hundreds and thousands during the dry season. Two species of region-specific antelope occur here, the puku and the Chobe bushbuck, which cannot be seen in other parts of Botswana except on the Chobe riverfront. Due to the variety of the Chobe vegetation and geological features, this magnificent wildlife sanctuary offers extreme contrasts and a fantastic cross-section of wildlife

After morning activity and breakfast, you will be transferred to Kasane Airport for your flight to Savuti Under Canvas

Stay 2 nights Including all including all meals, local brand beverages, safari activities and laundry 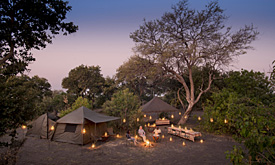 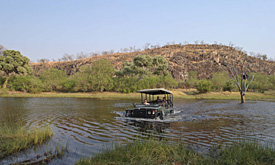 During the rainy season, Savute, a famous corner of Chobe National Park hosts the annual zebra migration, which peaks in January and February when the zebra and wildebeest congregate in vast numbers to graze on the sweeter grasses brought on by the rains. It is not uncommon to also catch sight of leopard, cheetah and African wild dog. Savute also supports the greatest concentration of the king of all beasts – the lion. The landscape of Savute is strikingly different from the lush Chobe riverfront, with an almost desert–like feeling that has animals escaping the heat by grouping together in the limited available shade. The stark dead trees found in the dry Savute channel are evidence of an erratic flow of the Savute River over the years.

After morning activity and breakfast, air transfer to Maun Airport